Having tried everything, she was afraid of failure…

When Bernie first started with us, her goal was to lose 5 stone.

She was really worried about her health, she had joint problems, always out of breath, but wanted to do something for herself. She had no motivation, was always tired and felt lazy, so it was a massive step for her. 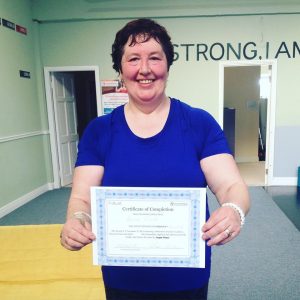 Bernie had tried weight watchers, slimming world, and dieting but nothing worked for very long. Bernie wasn’t exercising when she first signed up with us, but had seen an AD on Facebook, and decided to go for it.

Before she signed up, she was scared and worried that she wouldn’t be able to do it. Bernie was worried that her weight would be an issue and she would be too unfit for everything.

Bernie has, so far, lost 50 inches with us, 5 stone, and has changed her life. She feels great, now loves shopping, and feels really positive about the future.

Here’s what Bernie has to say to anyone sitting on the fence ‘Don’t worry. Don’t think about it. The staff will make you feel confident, if I can do it, you can do it.’

Please log in again. The login page will open in a new tab. After logging in you can close it and return to this page.